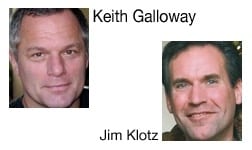 I spent my first 30 years in Chicago, followed by 20 years in Manhattan and since 2005 I've been in Savannah.

In early 1995 I was living and working in Manhattan, on a Friday afternoon, after a 3 martini lunch and a few months shy of turning 40, I quit my job in Manhattan, a month later I got on a plane headed east and 6 months later return from the west, having traveled through Italy, France, Spain, Portugal, Morrocco, Egypt, Pakistan, Dubai, India, China, Nepal, Bangladesh, Myanmar, Laos, Thailand, Vietnam, Malaysia, Hong Kong, Macao, Singapore, Indonesia, and Japan. I'd spent my 40th in a Casablanca nightclub watching belly dancers that were as old and large as they were talented. On other trips, I've traveled through most of Central and South America, Northern and Western Europe, parts of Eastern Europe, Iceland, and Turkey.

In 2005 I came to Savannah looking for a 2nd home and met Jim at a rug auction. A few months later I found this house, it had been vacant for decades and was in pretty rough condition. My real estate agent said I should buy it, fix it up and then rent out the apartments to college students who would pay enough to cover the mortgage! Then someone who lived nearby told me I shouldn't buy it because I was from New York and didn't know what I was doing, so the next day I bought it and moved in with two rescued Great Danes, Charlie and Moose. A year and 9 months later, I woke up on a Monday morning and told all the carpenters and painters that I had had enough,  Friday was their last day, and anything left unfinished would just have to wait.

In 2006 and 2007 I rented a couple of the apartments to some grad students but realized the cost to maintain a house of this size was far more than most of them would pay, so I had to come up with a Plan B. I took up a couple of pictures of the outside of the house, copied some generic living room and bedroom pictures off of the Internet, and used them to create a listing on VRBO.com (Vacation Rental by Owner.com). In July 2007 we got our first reservation and as the students graduated I added their apartments to the VRBO listing. From there things just took off, there was no looking back and I eventually sold my place in Manhattan.

Jim is from Baldwinsville, NY and was Exec. Director at Walt Disney World Hotels in Orlando, FL and later at the Weston Hotel in Savannah. He also has four great kids that he does everything for.

Over the last 20 years we've rescued 7 Great Danes, 5 have passed and now we have Emma and Hudson. 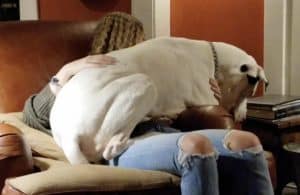 Emma is a 130 lb. lap dog born into a Great Dane’s body, and even though she’s been blind since birth, she can always find a comfy lap. Unfortunately, Emma was abused by her previous owner so she's very fearful of strangers. 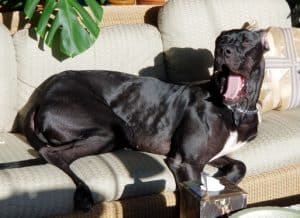 Hudson, 140 lb., our most recent rescue waking from a morning nap on the 2nd-floor porch.

After living in the house for the past 16 years, I can't say that I've ever seen a ghost, but I've never really looked for one either. It's not uncommon to hear a thud or for something to fall off a table in the middle of the night, but I think that's typical in big old houses.

Some guests have seen and spoken to a ghost, but it's usually after taking a late-night haunted Savannah tour and enjoying a few glasses of wine.

Then again, the house does have a history... 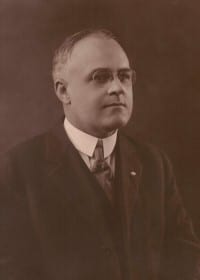 So reads the Cause of Death on the death certificate, dated Saturday, April 3rd, 1926, of the first owner Richard M. Lester and the coroner estimated the time of death to be 1 AM. At the time, most people died at home but if they were somewhere else there was a place to indicate where the death took place, for Mr. Lester this was left blank. Many people have asked me where this happened but I don't know. Although, at the time there were exposed beams located in what is now the Turner Loft Suite, the Caroline Suite, and the basement of the main house.

The Death Notice in the morning edition of the local newspaper on Monday, April 5th, 1926 stated the funeral would be that afternoon at 4:30 if Mr. Lester's father arrived via train from the Oklahoma Territory that afternoon, as expected, the service would be at St. John's Episcopal Church but the afternoon edition of the paper stated the funeral would instead be at  Mr. Lester's residence. At the time most churches did not allow the funeral of a suicide victim but Rev. W. A. Jonnard came to the house to conduct the service and W. L. Gignillat delivered the eulogy, closing with “No friend of his can view his untimely end without profound sorrow-some may be too quick of speech, but those who have looked death squarely in the face and have pondered most on the eternal verities will leave this tragedy as all else which the finite mind cannot fathom with Him who is infinite Love and Wisdom and will only say softly to his own soul “the Lord gave and the Lord hath taken away.”

Mr. Lester left behind his wife Victorine and their two daughters, Myrta and Margaret who continued to live in the house.

The obituary was titled "R.M. LESTER RESTS IN BONAVENTURE CEMETERY"

Mr. Lester grew up on Drayton St. across from Forsyth Park, attended Phillips Academy in Andover MA, earned his law degree from Yale, was a member of St. John's Episcopal Church, Past Master Solomon's Masonic Lodge. 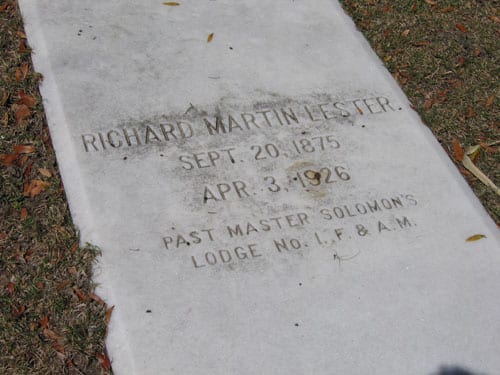 In 2011 local historians Steve and Judy Dunn acquired a box of documents that all had the same name and one photograph was included. The name was Richard Martin Lester and the documents included his law degree from Yale University, written in Latin on parchment, his diploma from the nation's oldest boarding school, Phillips Academy in Andover Mass, and his certificate of nobility from the Solomon's Lodge of the Mystic Shrine of the Masons, this is the only document with his signature. On the back of the image was written "Richard Martin Lester (Attorney), My Grandfather, Mimi and Myrta's Father & husband of Victorine Myrta Cooke Lester (Dower). The Dunn's brought these to the house, handed them to me, and said "I think these have been here before", it had been 85 years since Mr. Lester's death and 7 days before what would have been his 136 birthday.

In the 1950's and 60's the 2nd floor of the house was occupied by Ansa-Call Inc., a telephone answering service. 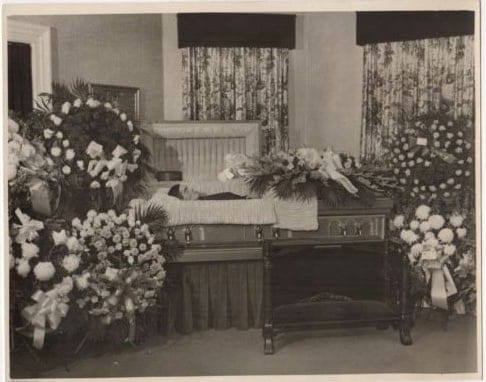 In the 70's Hayman-Futrell Funeral Home occupied the first floor. Shortly after buying the house a former employee told me how he’d delivered bodies through the kitchen door, performed the embalming in the back bedroom, and then laid out the deceased in the bay window of what is now the Remington Suite. In the middle of the night, a guest from Michigan saw a man standing at the foot of the bed watching her, she screamed, he vanished.

For some unknown reason, a previous owner installed deadbolt locks on both sides of every door, including every closet, pantry, and bathroom door. One morning a few years ago, a guest found the bedroom doorknob in the bathroom sink. 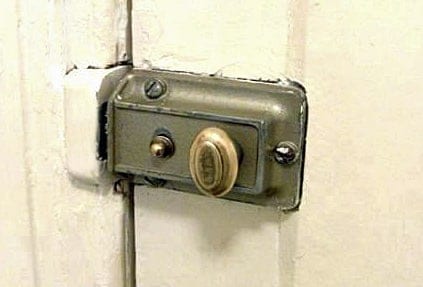 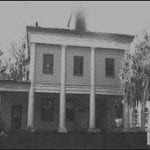 The house as it looked about 60 years ago. 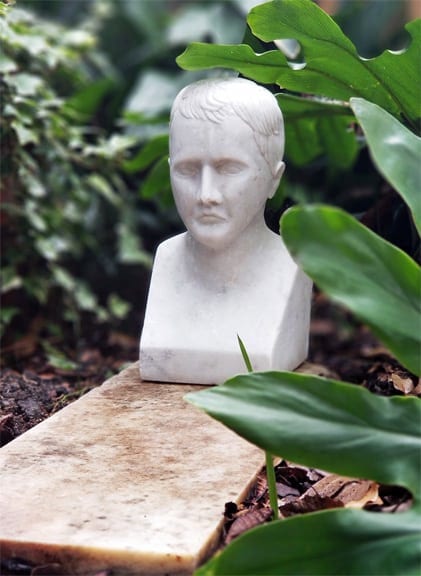 We found this little headstone in the backyard, we cleaned it, put it back where we found it and we don't know if there is anything beneath it. A local historian said that as there's no name or date, the child was most likely "born out of wedlock".

“Haunted Homes for Your Next Vacation”

"This 1895 mansion may still be home to its original owner. Guests have reported hearing doors close when no one was there, seeing objects move on their own, and seeing a man at the foot of the bed. This man is thought to be the home’s original owner, Richard Martin Lester, who committed suicide in it in 1926. The mansion is divided into four guest suites."

Our cobblestone streets have been twisting ankles for centuries, so please wear sensible shoes!

• Free Shuttle Service – It’s free, runs early in the morning to late at night, and we have maps in every suite.

• Bikes – We have two bikes for guests to use, $25 per day (sunrise to sunset) for two bikes and a lock. Please let us know when you’d like to reserve them either on your reservation or by calling us. Available for our guests only.

• Bus – The city bus system’s nearest stop is at the end of the block.

• Foot – it’s 1.6 miles from the inn to the Savannah River and there are maps and Savannah guide books in every suite.

• Guided Trolly Tours – Some tour companies will pick up guests at our inn and bring you back afterward, but ask us for current information.

• Uber and Lift – Available via their apps.

• Pedicabs and Horse Drawn Carriages are also available in Savannah.

1. Reservations of 30 or more consecutive nights are exempt from all taxes.

2. The housekeeper with change the bedding and bath towels every 4th day during the reservation.

3. A 25% discount is automatically deducted from the standard rate.

$25 per day (sunrise to sunset) for two bikes and a lock.

Please let us know when you’d like to reserve them either on your reservation or by calling us.

Dogs are the only animal we allow. Tea-cup to giant, well-behaved dogs of all sizes and breeds are welcome. Maximum of two dogs allowed per suite.

1. Dogs must always & forever be on a leash if they are not inside your suite.
2. Dogs are never to be allowed on the beds or furniture, but if you and your pooch like to cuddle on the sofa, we have plenty of old sheets!
3. You must keep your dog from doing its ‘business’ in the garden. When a dog marks a spot, others will often do the same and pretty soon the garden will be just a memory.
4. Please keep your cell phone with you and keep it turned on whenever you leave your dog unattended in your suite. For the sake of other guests, if your dog is barking for an extended period of time, we will call you so you can come back to the house.
5. You must pick up after your dog anywhere and everywhere in Savannah.
6. The use of “wee-wee’ pads inside any suite is not allowed.

In recent years countless dog owners have begun claiming their pet is a "service animal" because the Americans With Disabilities Act makes it illegal for hotels or inns to charge a "service animal" cleaning fee. Although, there is an exemption in the law, section 36.104 Definitions, Place of Public Accommodation (1), states "Place of lodging, except for an establishment located within a facility that contains not more than five rooms for rent or hire and that actually is occupied by the proprietor of the establishment as the residence of the proprietor. It's not legal for hotels and inns to charge a cleaning fee for service animals." The Galloway House Inn is owner-occupied and has 5 or less guest suites.

$75 pet cleaning charge for one or two dogs for the entire stay and "service dogs" are not exempt from this fee. If the dog is not on the reservation and we’re not advised via email prior to your arrival, there will be a $100 cleaning fee, so please, just be honest.

Save 20% Every Night on 3 Night Stays